In plant cells, apart from the plasma membrane, there is a hard protective covering which is called the cell wall. 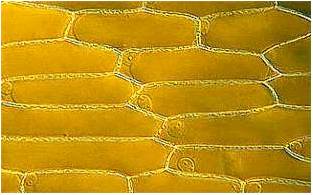 Why do plants have cell wall? What would happen if we possess cell wall?

The advantage of having a cell wall is, it is primarily made up of cellulose, a tough substance that provides great protection from external injuries. Like two sides of a coin, this protection is delivered at the expense of free movement. We can move in search of food as we don’t have cell wall. Plants cannot move and have to find their food from the rooted site itself. Definitely, their capability of photosynthesis clearly overcomes this disadvantage.
In plant cells, cell wall is made up of cellulose, hemicelluloses, pectin and proteins.
Remember fungal cell wall is made up of chitin (polymer of N-acetyl glucosamine) and bacterium has a peptidoglyacan cell wall.
Cell wall is a stiff protective layer outside plasma membrane and provides mechanical support and also determines the shape of the cell.

Cellulose is a linear, unbranched polymer, consisting of straight polysaccharide chains made of glucose units linked by 1-4 β glycosidic bond. 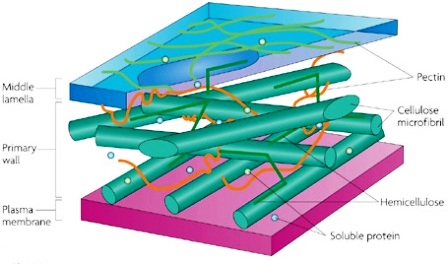 What are Hemicelluloses?
Are short branched heteropolymers made up of various kinds of monosaccharides like xylose, mannose, glucose etc.
Eg: glucomannans, xyloglucans, xylans.

What are Pectins?
A water soluble branched polysaccharide made up of negatively charged D-galacturonic acid and D-glucoronic acid residues.
Other depositions include cutin (made of fatty acids), Suberin (water resistant coat comprising of fatty acids found in many plant cell walls and cork. Mineral deposits are present in the cell wall of families Cruciferae and Cucurbitaceae (Calcium deposits), whereas silicate deposits are common in the cell wall of Graminae, grass family.

Cell wall synthesis?
Primary cell wall is the first formed boundary of the cell that is formed when cell is increasing in size. It is thin and permeable but cutin deposition makes it impermeable at some sites. Cellulose is synthesised from uridine diphosphoglucose (UDP-glucose) by an enzyme complex, cellulose synthase. Matrix materials, hemicelluloses and pectin are synthesised in the golgi apparatus and transported to the plasma membranes as vesicles where it is discharged and deposited.

Why wood is so hard?
Secondary wall is thick and permeable and consists of cellulose microfibrils and lignin. Even the master digesters, fungus cannot degrade lignin that offers mechanical protection from fungal pathogens. Lignin deposition is very common in wood.

The formation of the secondary  wall is not uniform in all the cells. The differentiation of various types off cells like parenchyma, collenchyma, sclerenchyma, fibres and tracheids are due to the secondary wall formation.

Tertiary wall: In some tissues a tertiary cell wall is formed on the inner surface of the seconary cell wall. This layer is very thin and is found in the xylem tracheids of gymnosperms. It is composed of mainly of xylan, instead of cellulose.

How adjacent cells are joined?
Middle lamella: It is thin amorphous layer of cemeting material present between the adjacent cells. It is chiefly made up of calcium pectate. It is formed at the time of cytokinesis by the joint activity of the cells between it lies.