Endoplasmic reticulum (ER) consists of interconnected network of membrane vesicles. ER is the only organelle that has direct physical connection with nucleus, the nuclear membrane. 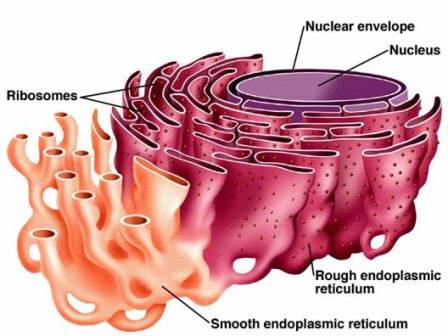 History:
The first one to observe ER was Porter in electron micrographs of liver cells and he coined the term Endoplasmic reticulum.
Location:
ER occurrence varies between cell types. Only SER is present in adipose tissue, brown fat cells and adrenocortical cells where lipid metabolism takes place. Actively protein synthesis cells like plasma cells, acinar cells of pancreas, goblet cells and cells of endocrine glands are rich in RER. Erythrocytes (RBC), egg lacks ER. The muscle cells are rich in SER, hence known as sarcoplasmic reticulum.
Glycosomes: In liver cells, SER appears as tubular networks which are rich in glycogen and observed as dense particles. It contains glycogen and enzymes involved in glycogen synthesis.
ER membrane is rich in phosphatidyl choline. It is assumed to be originated by invagination of nuclear membranes.

Endoplasmic reticulum How it works?
Rough ER is studded with ribosome (‘rough’ as ribosomes are present on the surface) and obviously the major function is protein synthesis specifically involved in the synthesis of secretory and membrane proteins. On the membrane of RER, ribosomes are attached to transmembrane glycoproteins called ribophorins I and II. The proteins synthesised on the ribosome passes through the membrane and gets accumulated in the lumen.   Lumen contains variety of enzymes involved in post translational modification (proteolysis, glycosylation etc) of membrane and secretory proteins.
SER smooth endoplasmic reticulum (smooth=no ribosomes on the surface) is the site of phospholipid biosynthesis. Drugs or toxic materials from both inside and outside of cells (xenobiotics) once inside the body are detoxified by enzymes present in the SER (Cytochrome P450 involved in drug detoxification) 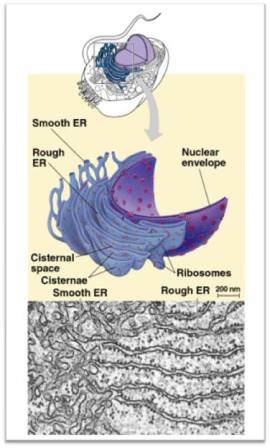