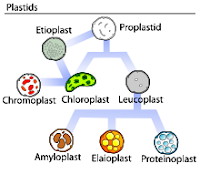 Leaves are green, fall leaves or autumn leaves are orange or yellow, ripe tomato is red, where we have red, white, yellow and beautiful shades of roses. Why? Why these variety of colours? of course feast for our eyes. Which is the paint box responsible for these colours? Plastids are the paint box where pigments are localized. These pigments will colour the different parts of the plant. Plastid is a general term that refers to a family of double membrane bound cytoplasmic organelles found in the plant cells and in some protists.


Remember there are plastids which are colourless and these plastids will synthesize and accumulate specific substances at specific sites which are required by plants.Let us get into the details.The term plastid was introduced by E. Haeckel in 1866.They develop from colourless precursors called proplastids which have the ability to divide and differentiate into various types of plastids.

Depending upon their colour, plastids are of three main types-Leucoplasts, chromoplasts and chloroplasts. (Schimper, 1883).


These are colourless plastids found in the storage organs. They are found large numbers in the cells of fruits, seeds, tubers etc. They are variously shaped, viz., oval, rod like, or filamentous. They lack grana and photosynthetic pigments. 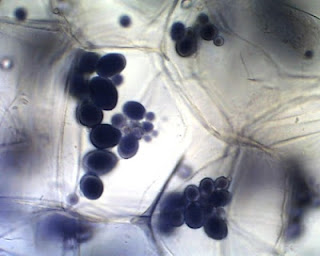 b) Aleuronoplast (Proteinoplast)
They store proteins and found in maize grains.

c) Elaioplast or oleosomes
They store lipids and found in the endosperm of castor seeds.

Chromoplasts
(G.K. chromo- colour, plastos-moulded)
They are coloured plastids other than chloroplast. They contain fat soluble yellow orange and red pigments chiefly carotenoids. They provide colour to many flowers for attracting pollinating insects and to fruit for attracting animals for dispersal.
Chromoplasts are formed either from chloroplast or from leucoplast. For e.g. green tomatoes and chillies turn red on ripening due to the formation of the red pigment called lycopin replacing the cholorophyll. Yellow pigment carotene is developed in the carrot by replacing leucoplast.
Chloroplasts
(G.K. chloro- green, plastos-moulded)
These are green coloured plastids containing the green pigment chlorophyll. They are the photosynthetic organelles of green plants. The number of chloroplast varies from cell to cell.
we will be discussing this organelle in detail in a separate post. Hope you know the reason, This organelle is responsible for life (aerobic) in our planet. Secondly, it is the site where photosynthesis, the conversion of energy from sun light to chemical energy that is utilized by all living organisms either directly or indirectly thereby supporting life on this planet.

Chloroplasts trap the radiant energy of sunlight during photosynthesis, and store as chemical energy in food stuffs. Oxygen is produced as a by product.The parenchyma cells of the leaves of higher plants have 20-40 chloroplasts.
Remember this term " etioplast" the most important term for your exams from this topic. Etioplasts are chloroplasts that are exposed to the light for the first time or seen in dark grown plants that have not been exposed to light. The achlorophyllous etioplast characterized by the accumulation of Mg tetrapyrrole protochlorophyllide (Pchlide), a chlorophyll (Chl) precursor within membrane tubules known as the prolamellar body (PLB)
Please Don't Forget to Share... Thank You... Visit Again...
Labels: Aleuronoplast, Amyloplasts, carotene, Chloroplasts, Chromoplasts, Elaiopast, etioplast, lycopin, Mg tetrapyrrole protochlorophyllide (Pchlide), Plastids, prolamellar body, Proteinoplast
Newer Post Older Post Home