The term lipids actually refer to a collection of organic molecules of varying chemical composition. They are grouped together on the basis of their solubility in non polar solvents. Lipids are commonly subdivided into four main groups. 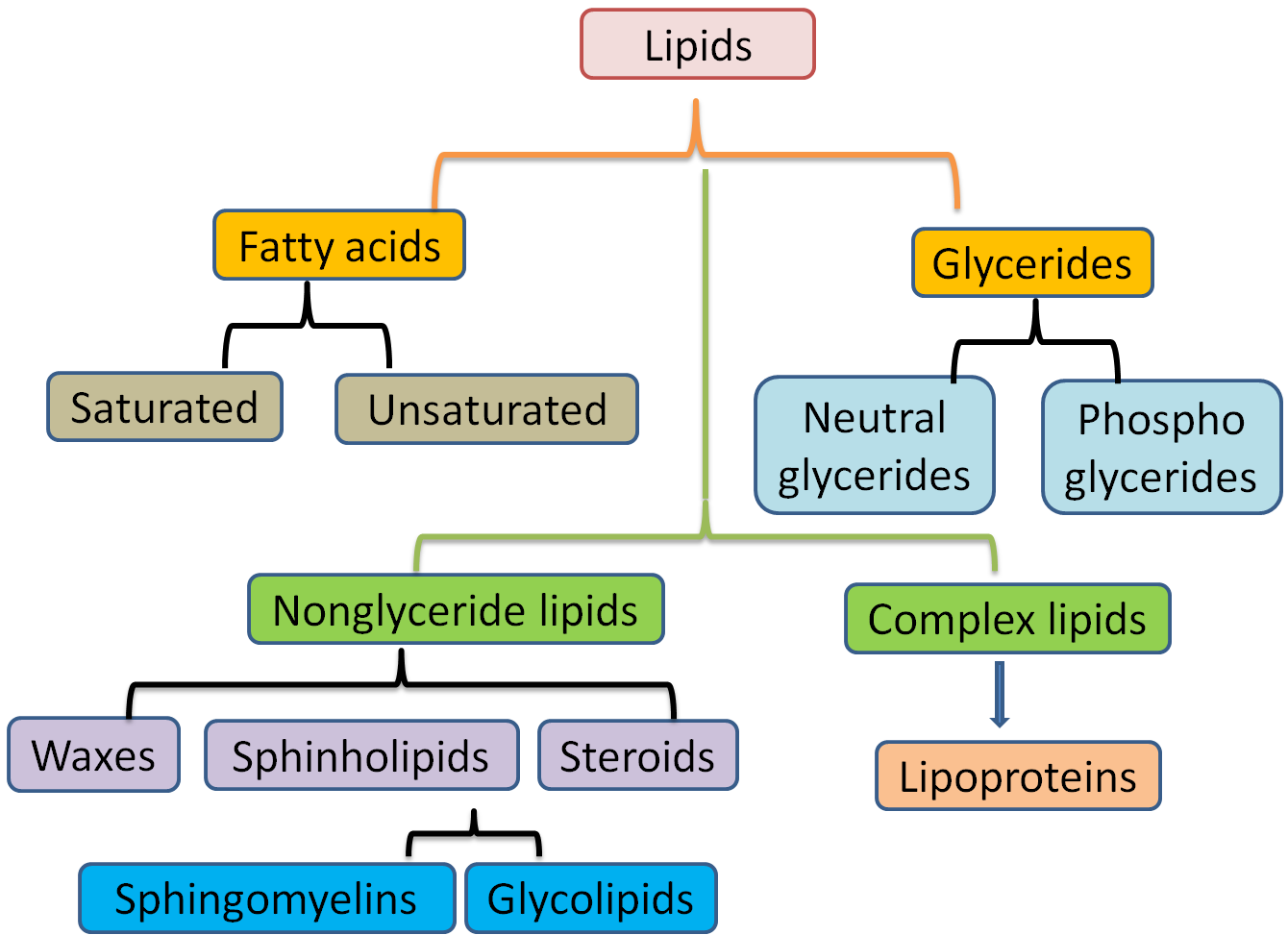 
Fatty acids have four major biological roles :
*  They are components of membrane (glycerophospholipids and sphingolipids)
*  Several proteins are covalently modified by fatty  acids
*  They acts as energy stores (triglycerols)
* Serve as hormones (Prostaglandins) and intracellular second messengers (DAG and IP3).
2. Glycerids: Glycerol containing lipids
They are the most abundant lipids. The triesters of glycerol (triglycerides) are of greatest importance. Neutral triglycerides are important because of their ability to store energy. Triglycerides are esters of fatty acids with alcohols like glycerol. Fats and oils are generally called simple lipids. They are the main form in which fat is stored in plants and animals.

Phospholipids: They are the common lipids found in cell membranes. Phosphoglyceride belong to a class of phospholipids. These contain glycerol, phosphates, two fatty acids and compound that may be choline, ethanolamine, serine or inositol. Lecithins and and ciphalins are representative of the phospholipids.

Sphingolipids
They are similar to phospholipids, but Sphingosine is present instead of glycerol.
Steroids
They do not contain fatty acids but are included in the lipids because they have lipid like properties. They are composed of four fused carbon rings. They include bile salts, sex hormones etc.
Waxes
They are esters of fatty acids with long hydrocarbon chains. The alcohols in waxes have only one hydroxyl group. Cuticle is a waxy coating covering the epidermis of leaves and stem of plants. It prevents excessive evaporation of water. Sebum, the secretion of sebaceous glands in our skin is a mixture of waxes and triglycerides
Sterols
Sterols are alcohol derivatives of steroids. Cholesterol (C27H45OH) is a common steroid found in the animal body.   It may occur free or as an ester with fatty acids. Cholesterol are insoluble in water, so they are deposited in the arteries and veins when the amount increases. This may cause high blood pressure and heart diseases.
Many hormones like testosterones, progesterone etc are synthesized from cholesterol. Vitamin D is formed in our body from a derivative of cholesterol.
Ergosterol (C28H43OH) is a sterol found in plants. Diosgenin is a steroid produced by the yam plant Dioscorea. It is used in the manufacture of anti fertility pills.