Difference between Cilia and Flagella

Cilia and Flagella are fine hair like cytoplasmic processes arising from the free margins of the cell. These are structurally almost similar structures. However, they differ in size, number and mode of beating.


Distribution of the Cilia and Flagella
The Cilia occur in the protozoans of the class ciliate and members of other classes and ciliated epithelium of the metazoan. The cilia may occur on external body surface and may help in the locomotion of such animals as the larvae of certain platyhelminthes, echinodermata, mollusc and annelid. The nematode worms and arthropods have no cilia.

Except for sperm, the cilia in mammalian systems are not organelles of locomotion. But their effect is the same, that is, to move the environment with respect to the cell surface.

The flagella occur in the protozoans of the class Flagellata, choanocyte of the sponges, spermatozoa of the metazoan and among plants in the algae and gamete cells. 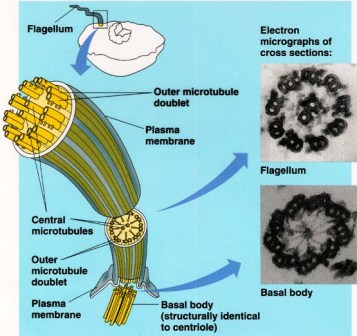 The axoneme of cilia has a variety of proteins such as α and β tubulins in the microtubules, dynein (the microtubule ATP ase), nexin and others (Table 1).

Four types of ciliary movements have been recognized which are as follows:
Difference between:
Cilia and Flagella


Immotile Cilia Syndrome (Kartagenres’s Syndrome):
Cilary motion can be affected by many deficiencies in the protein composition of the organelle. For example, in immotile cilia syndrome, a condition characterized by severe respiratory difficulty and male sterility, the underlying genetic defect is the absence of inner and outer dynein arms on the peripheral doublets of both cilia and flagella. The symptoms of this syndrome result from the immobility of cilia in the respiratory tract and of the flagella in the sperm.
In Chlamydomonas several mutational defects have been studied in the axoneme of flagellum which may lead to paralysis of the flagellar function.