Bacterial transformation was first described by Fred Griffith in 1928. His work on Streptococcus pneumonia a bacterium that causes human pneumonia and that can also kill mice revealed the uptake of genetic material from the surroundings by a bacterium caused change in its genotype and phenotype. He called it the “transforming principle”.
Look at the figure for details of the experiment.


What is competence?
Competence is the ability of a cell to incorporate naked DNA from the surroundings. Bacteria exhibit this property only at certain stages of life cycle. During the competent state, cells produce certain proteins called competence factors.
Functions of competent factors include modification of cell wall so that it can bind to DNA fragments and helps in DNA uptake and incorporation of DNA. 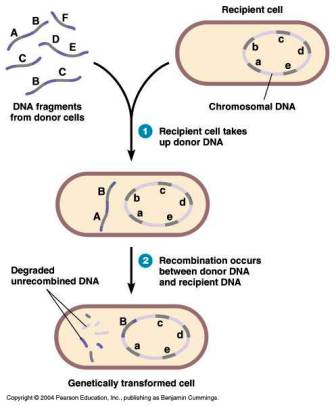 Difference between exogenote, endogenote and merozygote
The process of transformation is widely employed in genetic engineering to make transformed organisms. Bacterial cells are often made competent by treating with Calcium chloride followed by heat shock treatment.
In short transformation is the process by which DNA fragments are taken up and incorporated by a cell. Now let us discuss the second mechanism of genetic recombination in bacteria and that is transduction.
Please Don't Forget to Share... Thank You... Visit Again...
Labels: bacteria, bacterial reproduction, Bacterial transformation, Competence, endogenote, exogenote, Fred Griffith, Griffith's Experiments, meromixis, merozygote
Newer Post Older Post Home