Structure and Function of the Major Histocompatibility Complex (MHC)

During organ transplantation, the doctors often ask for an organ donor who is a close relative of the recipient. Why? He or she often tells us that, the more genetically closer the donor to the recipient the more is the chance for successful translation. The acceptance or rejection of transplant is controlled by a set of genes in the recipient’s body which is called as Major Histocompatibility Complex (MHC) or Human Leukocyte Antigen (HLA) complex in humans. HLA complex consists of genes encoding cell surface glycoproteins that are required for antigen presentation to T cells and also responsible for rapid graft rejection. The compatibility of MHC proteins of donor and recipient will determine the success of transplantation.

MHCs are just like fingerprints and all nucleated cells possess this fingerprint
The genes encoding for MHC/HLA proteins are highly polymorphic, that is exists in many forms. In humans, MHC proteins are specified by genes with nearly 170 alleles each. Thus the chance of occurrence of same allele in two individual is extremely rare. So each individual has specific MHC/HLA proteins just like fingerprints. This will help the immune system in distinguishing its own cells from foreign cells. That is the reason for transplant rejection as the immune system recognises the transplant cells as foreign (due to different HLA protein on its cell surface) and initiating an immune response just like a foreign particle or antigen leading to rejection. The compatibility of MHC/HLA proteins of donor and recipient will be high if they are genetically closely related.

MHC complex:
The genes for HLA proteins are clustered in the major histocompatibility complex located on the short arm of chromosome 6.
MHC Class I proteins are coded by three genes HLA-A, HLA-B and HLA-C. For more
MHC class II proteins are coded by HLA-D loci. As I mentioned earlier, these genes are highly polymorphic. In humans there are at least 47 HLA-A genes, 88 HLA-B genes, 29 HLA-C genes and more than 300 HLA-D genes. For more 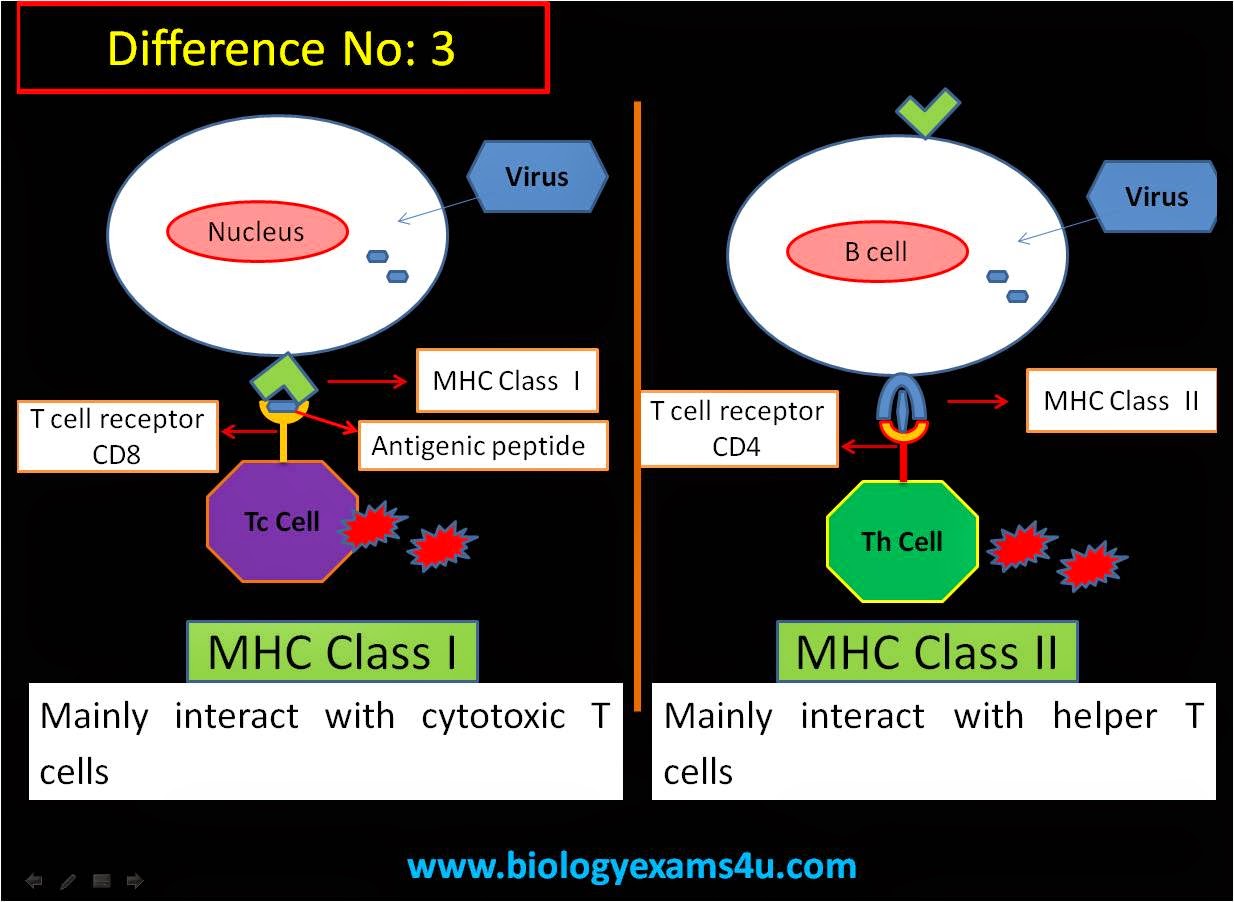 1) All nucleated cells has MHC class I glycoprotein on its surface. Immune system depends on these proteins for distinguishing between self-cells and foreign cells.
2) T- cells are completely dependent on MHC proteins for recognising antigens. Both cytotoxic T cell and Helper T cells recognise antigens only when they are presented on the cell surface in association with either MHC class I or Class II proteins. To conclude, T cells are ‘blind’ without MHC or T cells can only recognise an antigen bound to MHC protein.
Medical importance
3) Success of the organs transplants depends on the compatibility of MHC genes on the donor and the recipient
4) People with certain MHC genes are prone to many autoimmune diseases eg: people with HLA-DR 4 genes are susceptible to Rheumatoid arthritis.
In the next post we will discuss Class I and Class II MHC proteins in detail.
Please Don't Forget to Share... Thank You... Visit Again...
Labels: HLA proteins, major histocompatibility complex class ii, mhc class 1, mhc class 1 vs mhc class 2, mhc class 2, MHC class I, MHC class II, MHC genes, the major histocompatibility complex