Agrobacterium is a Gram negative, rod shaped soil bacterium that belongs to the family Rhizhobeaceae. This bacterium has the innate ability to transfer its Ti plasmid T-DNA to the plant genome. Upon successful integration, plant cells starts synthesizing opines which is a delicacy for bacteria.

Step 2 : Bacterial chromosomal genes called chv genes facilitates intimate binding of bacteria to the plant cell at the wound site.
Step 3 : Acetosyringone activates vir region binds to vir A protein which is an acetosyringone receptor.
Step 4 : vir A phosphorylates vir G which dimerises and activates expression of all vir operons.
Step 5 : All the vir genes together mediates T DNA transfer and its integration into the plant genome.
Step 6: Auxin and cytokinin of T-DNA induces cell proliferation leading to crown gall formation and opine synthesis will be carried out by opine gene. Now bacteria has its food in large quantity. 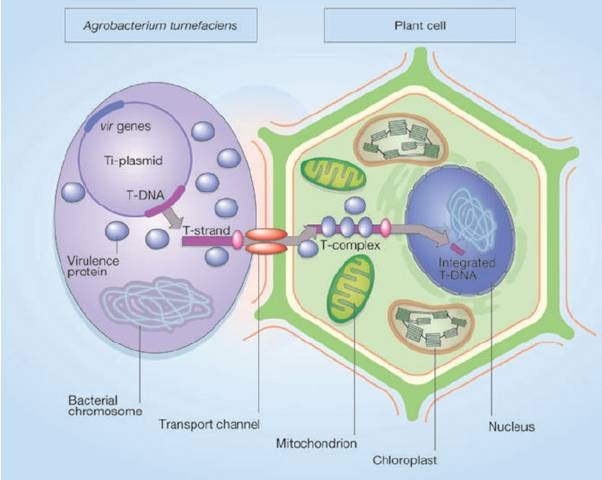