In prokaryotes, the DNA is circular.  Replication starts at a single origin (ori C) and is bi-directional and semi-conservative.

The region of replicating DNA associated with the single origin is called a replication bubble or replication eye and consists of two replication forks moving in opposite direction around the DNA circle.

During DNA replication, the two parental strands separate and each acts as a template to direct the enzyme catalysed synthesis of a new complementary daughter strand following the normal base pairing rule.

I. Initiation
Step 1: Binding of DNA around an initiator protein complex DNA-A ATP ~30-40.
The DNA B or helicase unwinds ori C (origin of replication) and extends the single stranded region for copying.

Step 2: Single strand binding protein (SSB) binds to this single stranded region to protect it from breakage and to prevent it from renaturing.
As the parental DNA is unwound by DNA helicases and SSB (travels in 5’-3’ direction), the resulting positive supercoiling (torsional stress) is relieved by topoisomerse I and II (DNA gyrase) by inducing transient single stranded breaks. 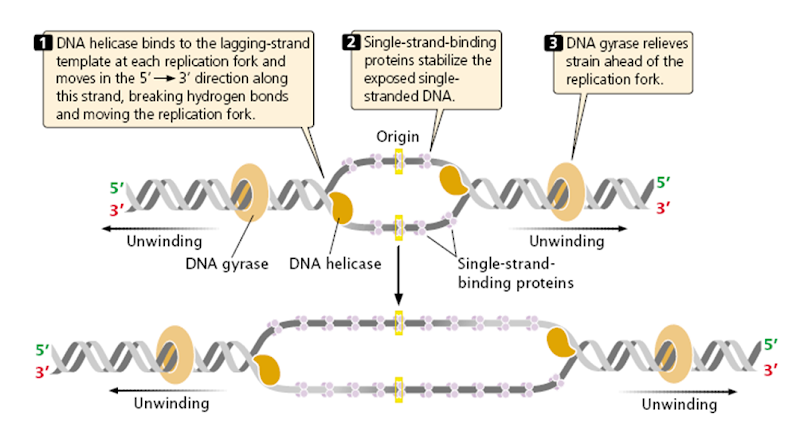 Step 3: The enzyme DNA primase (primase, an RNA polymerase) then attaches to the DNA and synthesises a short RNA primer to initiate synthesis of the leading strand of the first replication fork.
II. Elongation 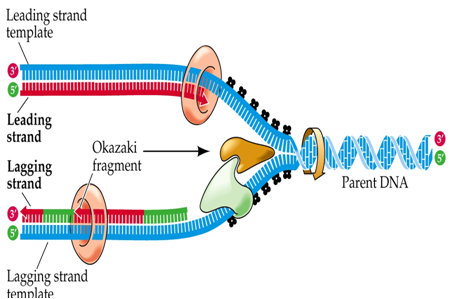 Step 5: After DNA synthesis by DNA pol III, DNA polymerase I uses its 5’-3’ exonuclease activity to remove the RNA primer and fills the gaps with new DNA.

Step 6: Finally DNA ligase joins the ends of the DNA fragments together.

III. Termination
Step 7: The two replication forks meet ~ 180   degree opposite to ori C, as DNA is circular in prokaryotes. Around this region there are several terminator sites which arrest the movement of forks by binding to the tus gene product, an inhibitor of helicase (Dna B).