Bacteria are the most ubiquitous organism on earth. Prokaryote includes bacteria and blue green algae. Bacteria are of two groups eubacteria and archae bacteria. The eubacteria are commonly found in soil, water and living in or on larger organisms include the gram positive and the gram negative and the cyanobacteria. Archae bacteria are a group of ancient bacteria.They are supposed to be originated just after the origin of life on earth. They can live in extreme environmental conditions. They may be called the 'oldest living fossils'. 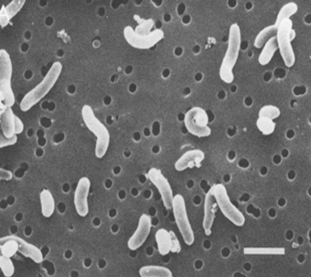 How big is archae bacteria?
The size of archae bacteria is less than a micrometer that is one thousandth of millimetre. We completely depend on electron microscopes for visualizing and studying the structural features of these little ones.

Surface appendages
Archaens may be flagellated or non-flagellated. Often tuft of flagella are attached to on one side of the cell. The function of flagella is locomotion or movement.
Classification of Archae bacteria:  They are of three types: methanogens, halophiles and thermoacidsphiles