1.  The expansion of one cell sheet over other cells during early embryonic development is  called
a) epiboly
b) ingression
c) delamination
d) involution

4. λ phage can tranduce bacterial genes only at or near the gene involved in
a)galactose utilization
b) CAP
c) galactose repressor
d) repressor synthesis

5. The hydrolysis of GTP is caused by the transduction of the newly formed peptidyl-tRNA in the A site into the P site by
a) eEF-2
b) eEF-3
c) eIF-S
d) eIF-2

9. Archaeopteryx is known as the missing/ connecting link because it is a fossil and has characters between
a) birds and reptiles
b) reptiles and mammals
c) chordates and non chordates
d) fishes and mammals

10. Histamine is released by 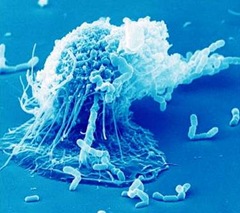 a) macrophages
b) mast cells
c) basophils
d) lymphocytes
Learn more:
Answers:
1. a) epiboly
2. c) are roughly parallel to the helix axis
3. b) Citrate
4. a)galactose utilization
5. a) eEF-2
6. d) allosteric enxymes
7. c) the animal contains many types of B cells, each producing one kind of antibody
8. d) the traits that differ among species are not the same as the traits that differ among individuals within the species
9. a) birds and reptiles
10. b) mast cells
Please Don't Forget to Share... Thank You... Visit Again...
Labels: icmr jrf, icmr jrf 2013, ICMR jrf model questions, icmr jrf previous questions