2. In a mixture of the five proteins listed below, which should elute second in size-exclusion (gel- filtration) chromatography? 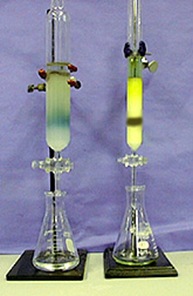 3.By adding SDS (sodium dodecyl sulfate) during the electrophoresis of proteins, it is possible to:
a) determine a protein’s isoelectric point.
b) determine an enzyme’s specific activity.
c) determine the amino acid composition of the protein.
d) preserve a protein’s native structure and biological activity.
e) separate proteins exclusively on the basis of molecular weight.


4. To determine the isoelectric point of a protein, first establish that a gel:
a) contains a denaturing detergent that can distribute uniform negative charges over the protein’s surface.
b) exhibits a stable pH gradient when ampholytes become distributed in an electric field.
c) is washed with an antibody specific to the protein of interest.
d) neutralizes all ionic groups on a protein by titrating them with strong bases.
e) relates the unknown protein to a series of protein markers with known molecular weights, Mr.


5. The first step in two-dimensional gel electrophoresis generates a series of protein bands by isoelectric focusing. In a second step, a strip of this gel is turned 90 degrees, placed on another gel containing SDS, and electric current is again applied. In this second step:
a) proteins with similar isoelectric points become further separated according to their molecular weights.
b) the individual bands become stained so that the isoelectric focus pattern can be visualized.
c) the individual bands become visualized by interacting with protein-specific antibodies in the second gel.
d) the individual bands undergo a second, more intense isoelectric focusing.
e) the proteins in the bands separate more completely because the second electric current is in the opposite polarity to the first current.