An Overview of Photosynthesis

Photosynthesis is a vital process where chloroplast of green plants synthesize sugars by using water and carbon dioxide in the presence of sunlight.

Photosynthesis literally means synthesis with the help of light.The green plants carrying out photosynthesis are called autotrophic plant, i.e. they can synthesize their own food. During the process of photosynthesis light energy (solar energy) is converted to chemical energy and stored in the organic matter like carbohydrates. This is the only process by which solar energy is trapped by autotrophs and converted into food for the rest of the organisms. During the process, oxygen is liberated in to the atmosphere.The only process that reduced the CO2 contents of atmosphere to 0.03% and increases the level of O2 to 21%. 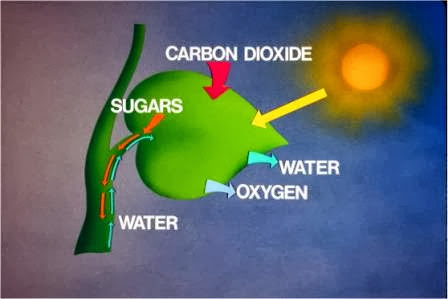 It is also known as carbon assimilation because carbon of CO2 is incorporated into the plant tissues.

The Mechanism of Photosynthesis
A major advance in our understanding of the chemical reaction of photosynthesis came in the early 1930s with a proposal by C. B. Van Niel.


Consider the overall equation of photosynthesis as given earlier


The prevailing belief in 1930 held that the energy of light was used to split CO2, Releasing molecular oxygen (O2) and transferring the carbon atom to a molecule of water to form a unit of carbohydrate (CH2O).

In1931, Van Niel proposed an alternate mechanism based on his work with sulphur bacteria. It had been demonstrated that these organisms were able to reduce CO2to carbohydrate using the energy of light without the simultaneous production of molecular oxygen (O2). The proposed reaction for sulphur bacteria was

CO2+2H2S --> (CH2O) +H2O+2S
Bacterial Photosynthesis vs Photosynthesis in Plants
Postulating a basic similarity in the photosynthetic processes of all organisms, van Niel proposed a general reaction to include all these activities:
CO2+2H2A --> (CH2O) + H2O+ 2A

For the production of a glucose (hexose),the reaction would be

Van Niel recognized that photosynthesis was essentially a process of oxidation and reduction. Here H2A is an electron donor (reducing agent) and can be represented as H2O, H2S, or other reduced substrates utilized by various types of bacteria. Carbon dioxide is an oxidizing agent, which in a plant, is reduced to form hexose in the following reaction:
6CO2+12H2O--> C6H12O6+6H2O+6O2

In this reaction, each molecule of oxygen is derived not from CO2 but from the breakdown of two molecules of H2O, a process driven by the absorption of light. The role of water in the formation of molecular oxygen was clearly explained by Samuel Ruben and Martin Kamen (1941). Scientists carried out experiments on suspensions of green algae using labelled isotope of oxygen, 18O. Van Niel's hypothesis had been confirmed.The Van Niel proposed placed photosynthesis in a different perceptive; it became, in essence , the reverse of mitochondrial respiration. Whereas respiration in mitochondria reduces oxygen to water, photosynthesis in chloroplasts oxidizes water to oxygen.The former process release energy, so the latter process must require energy. 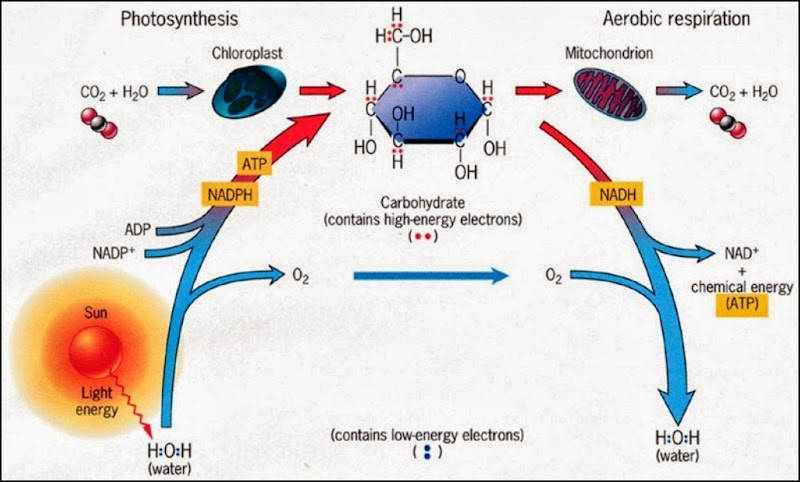 Photosynthesis is a complex oxidation-reduction process. Here water is oxidized and carbon dioxide is reduced to carbohydrates.

They are : Light Reaction and Dark Reaction

During the first stage, light dependent reactions (light reaction) energy from the sunlight is absorbed and stored as chemical energy in two key bio molecules as ATP and NADPH.