Southern Blotting Principle and Application
Detailed Procedure
Step 1: DNA purification
Isolate the DNA in question from the rest of the cellular material in the nucleus.
Incubate specimen with detergent to promote cell lysis.
Cell Lysis frees cellular proteins and DNA. 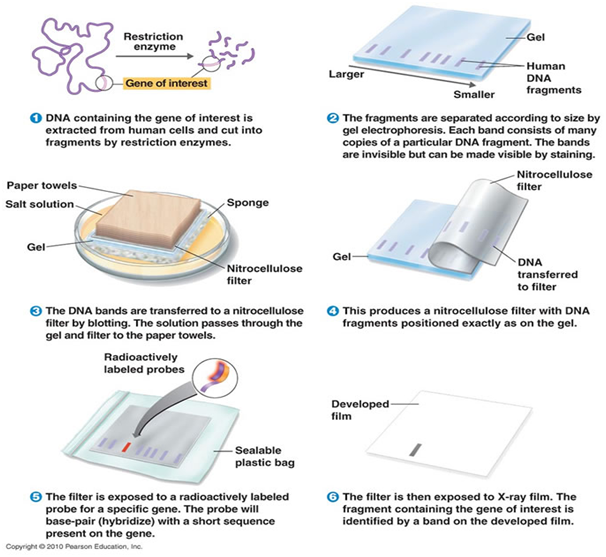 Step 3 : Gel Electrophoresis
Nucleic acids have a net negative charge and will move from the left to the right. The larger molecules are held up while the smaller ones move faster. This results in a separation by size.
Gels are Agarose or polyacrylamide with microscopic pores
Gel is soaked in a buffer which controls the size of the pores
Standards should also be run

Gels can be stained with ethidium bromide (EtBr). This causes DNA to fluoresce under UV light which permits photography of the gel.
This will be help us to know the exact migration of DNA standards and the quality of the RE digestion of the test DNA.

Step 4 & 5 : Denaturation & blotting
DNA is then denatured with an alkaline solution such as NAOH. This causes the double stranded to become single-stranded.
The process of transferring the DNA from the gel to a membrane is called as blotting. The blot is usually done on a sheet of nitrocellulose paper or nylon. DNA is then neutralized with NaCl to prevent re-hybridization before adding the probe. Transferred by either electroblotting or capillary blotting.
The blot is made permanent either by:
Step 6 : Hybridization
The labelled probe is added to the membrane in buffer and incubated for several hours to allow the probe molecules to find their targets.
Preparing the probe
Small piece of labelled DNA used to find another piece of DNA usually prepared by making a radioactive copy of a DNA fragment.

Step 7 & 8 :  Wash and autoradiography
Wash excess probe that are bound non-specifically to the membrane
Blot is incubated with wash buffers containing NaCl and detergent to wash away excess probe and reduce background.
Detection: Radioactive probes enable autoradiographic detection.
If the probe is radioactive, the particles it emits will expose X-ray film.
By pressing the filter and film, the film will become exposed wherever probe is bound to the filter. 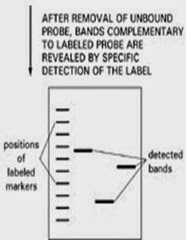