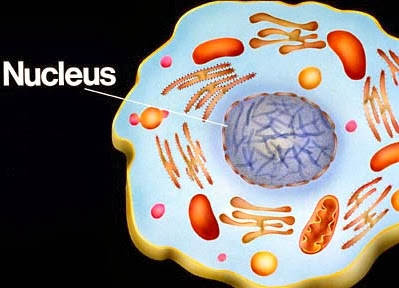 The nucleus can be divided into five parts: nuclear membrane, nucleoplasm, nuclear matrix, chromatin and nucleolus. The chemical composition of nucleus is, DNA: 9-12%, Histone (Basic Proteins): 15%, Enzymes, Acid proteins and neutral proteins:65%, RNA: 5% and Lipid:3% and minerals in traces. 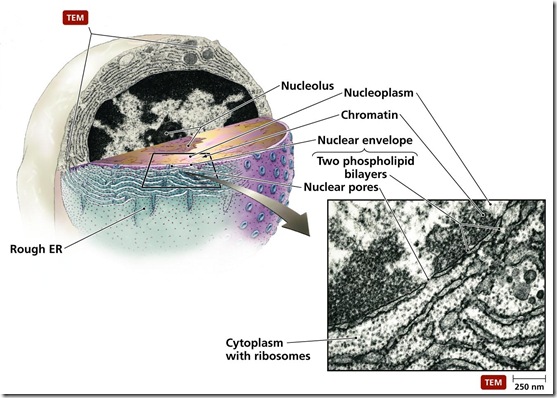 Functions of Nucleus
1. Nucleus contains all the genetic information in its chromatin.
2. Nucleus take part in transmission of genetic information from parent cell to its daughter cells and from one generations to the next.
3. Division of nucleus is pre requisite to cell division.
4. Nucleus forms ribosomes on its nucleolus.
5. They develop due to changes in genetic material contained in the nucleus.
6. It maintains cellular metabolism through controlling synthesis of particular types of enzymes.
7. Differential functioning of genes result in cell differentiation and development of particular morphology.
8. Newly formed cells grow in size and become mature with the help of structural proteins and other substances formed on instructions from genes contained in chromatin.
Please Don't Forget to Share... Thank You... Visit Again...
Labels: functions of, nucleus, Nucleus Functions, nucleus structure, size of the nucleus