Lymphatic system  of man consists of lymphatic capillaries, lymphatic vessels, lymph nodes, lymphatic ducts, lymph and other lymph organs like spleen.  Lymph is an interstitial fluid, present between the cells of a tissue and it has the same composition  like plasma except it lacks RBCs and large plasma proteins. 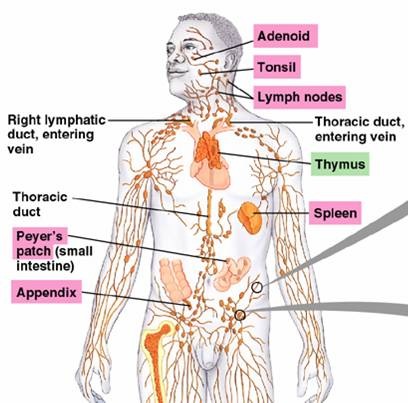 Functions of Lymphatic System
1. It helps to maintain fluid and balance in the tissues and also have a major role in the defense against infection.
2. It acts as a ‘middle man’ which transport oxygen, food materials, hormone, etc., to the body cells and brings carbon dioxide and other metabolic wastes, from the body cells  to blood  and then finally pours the same into the venous system.
3. It drains excess tissue fluid from the extracellular spaces back into the blood.
4. It takes lymphocytes and antibodies from the lymphatic nodes to the blood.
5. It transports fat digested and absorbed in the intestine to the blood in the form of chylomicron droplets.
6.  It destroys the invading microorganisms and foreign particles in the lymphatic nodes.
7. It maintains the quality and quantity of the blood by restoring the fluid and solutes that leave it.
8. It brings plasma protein macromolecules synthesized in the liver cells and hormones produced in the exocrine glands to the blood.
Please Don't Forget to Share... Thank You... Visit Again...
Labels: human body systems, human body systems functions, Lymphatic System Functions