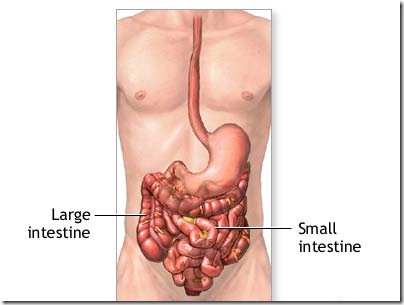 1. Small intestine is the major seat of absorption of digested food. For this, it has villi for increasing its absorptive surface by 10 times.
2. Digestion of all digestible components of food is completed.
3. It produces a number of hormones for controlling the secretary and absorptive activity of different parts. The important hormones are secretin, cholecystokinin, villikinin, enterogasterone, motlin, enterocrinini and duocrinin.

1. Absorption of water, so as to convert the liquefied indigestible matter into faecal matter.
2. Toxic metals and other toxins are secreted into the faecal matter in the region of large intestine.
3. It stores faecal matter temporarily.
4. It harbours symbiotic bacteria. The bacteria produce vitamins K, thiamine, riboflavin and B12.
5. Its lining layer has mucous glands for lubrication of the solidified faecal matter.
Please Don't Forget to Share... Thank You... Visit Again...
Labels: Functions of Human Digestive System, Functions of Large Intestine, Functions of Small Intestine, human body systems, human body systems functions, Small intestine vs Large intestine