Humoral immunity: Pathway 2 B cell as antigen presenting cell (APC)
Definition: Humoral immune response refers to the host defense mechanisms that are mediated by antibodies produced by plasma cells of B cells.
It protects against extracellular bacteria and foreign macromolecules.
There are two pathways in antibody production
Pathway 1: B Cell Mediated Pathway which is independent of T helper cells.
We have already discussed this pathway in the last post.
Pathway 2: B Cell- T helper Cell Mediated Pathway
In this pathway, B cell acts as antigen presenting cell 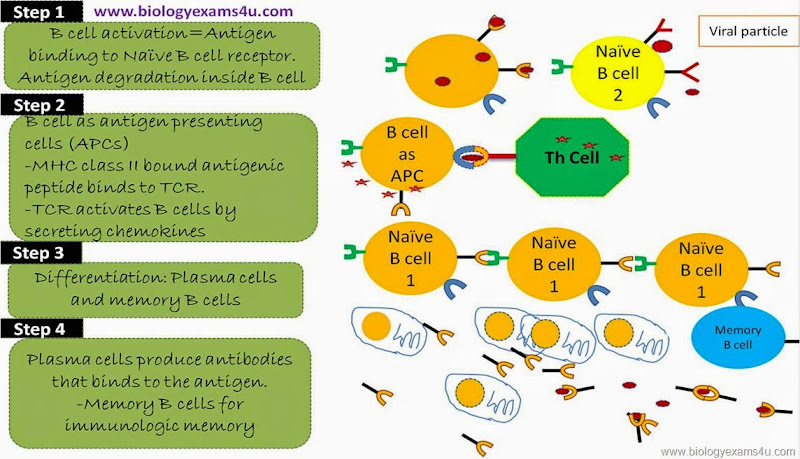 
Step 3:
Clonal selection and Differentiation:
Division of that activated B cell
This activated B cell is selected to divide forming many copies of that cell. That particular clone of B cell is selected to divide and is called as clonal selection.
Differentiation: Plasma cells and memory B cells
Later this B cells differentiate to form plasma cells or effecter cells and memory B cells
Step 4:
Plasma cells produce antibodies that bind to the antigen and ensure its clearance from the system by agglutination, precipitation or neutralization.
Memory B cells are meant for immunologic memory or secondary immune response. When the same antigen comes for the second time, these memory B cells will recognize it quickly and induce a heightened immune response. This will clear out the pathogen from the system soon.