Definition: Nitrogen cycle is the cyclic movement of nitrogen between atmosphere, organisms and soil.
or
Nitrogen cycle is a continuous series of natural processes by which nitrogen passes successively from air to soil to organisms and back to air or soil involving principally nitrogen fixation, nitrification, decay, and denitrification.
Nitrogen cycle is a gaseous cycle as atmosphere is the major reservoir of nitrogen with nearly 79%.
Why nitrogen is important?
Nitrogen is an essential element required for the synthesis of bio-molecules like proteins, DNA, vitamins, chlorophyll, alkaloids etc. It is a critical limiting element for plant growth and reproduction. Atmospheric N2 is extremely stable, unreactive and inert with triple covalent bond between nitrogen atoms. Therefore, plants and animals cannot use atmospheric N2. So it should be converted to some other usable forms such as nitrates (NO3-). This conversion process is primarily carried out by microorganisms. N2
The Major steps involved in nitrogen cycle 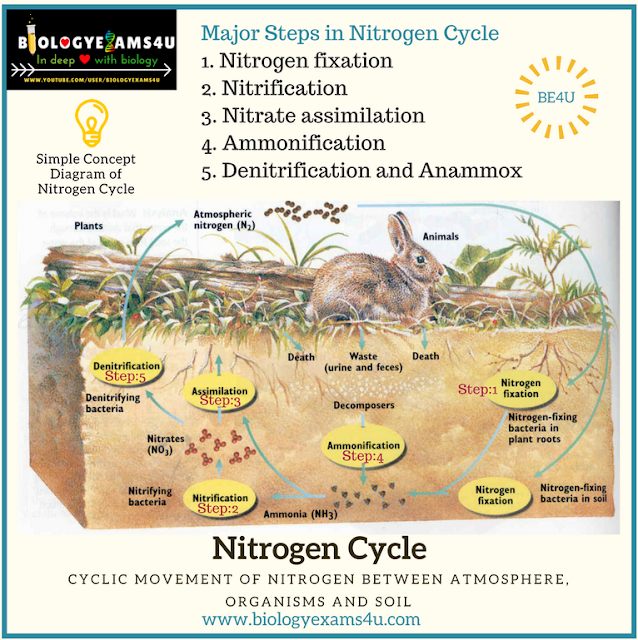 1. Nitrogen fixation
2. Nitrification
3. Nitrate assimilation
4. Ammonification
5. Denitrification and Anammox
Step 1: Nitrogen fixation
Nitrogen fixation is the conversion of atmospheric N2 to ammonia (NH3) which can be readily utilized by the plants for synthesis of bio-molecules.
3 Major Methods of Nitrogen fixation
a) Biological Nitrogen fixation (BNF): carried out by prokaryotes called as nitrogen fixers or diazotrophs. It accounts nearly 70% of natural nitrogen fixation.
Nitrogen fixers include some bacteria like Rhizobium, blue green algae like Anabaena and lichens like Collema.
Nitrogen fixers are either symbiotic or free living.
Symbiotic N2 fixers include the bacteria Rhizobium and Bradyrhizobium found in the root nodules of leguminous plants (pea, beans etc).
Other examples:  The water fern Azolla’s symbiosis with a cyanobacterium Anabaena azollae. Anabaena colonizes cavities formed at the base of Azolla fronds. The cyanobacteria fix significant amounts of nitrogen in specialized cells called heterocysts.
Examples of free living Nitrogen fixers include species in the genera Azotobacter, Bacillus, Clostridium, and Klebsiella.
N2 + 8 H+ + 8 e−+ 16 ATP → 2 NH3 + H2 +16 ADP +16 Pi
N2 fixation is a high energy requiring process and N2 fixers uses 16 moles of ATP to fix each molecule of Nitrogen (N2)
b) Non-biological N2 fixation by lightning, volcanic eruptions etc.
c) Industrial nitrogen fixation (fertilizers) by the Haber-Bosch process
N2 + 3H2 à2NH3 in the presence of catalyst like Ni at 5000C and 300 atm pressure.
Today, nearly 80% of the nitrogen found in human tissues originated from the Haber-Bosch process.

2. Nitrification
It is the process that converts ammonia (NH3) to nitrite (NO2-) and then to nitrate (NO3-) by nirtrifying bacteria.
Step 1: Oxidation of ammonia (NH3) to nitrite (NO2-) or NH3 àNO2-
Microbes involved: bacteria in the genera Nitrosomonas, Nitrosospira, and Nitrosococcus (Nitrite bacteria)
Step 2: Oxidation of nitrite (NO2-) to nitrate (NO3-) or NO2-à NO3-
Microbes involved: bacteria in the genera Nitrobacter (Nitrate oxidizing bacteria)

3. Nitrate assimilation
Now soil nitrates (NO3-) formed by nitrification can be taken up by the plants for the synthesis of amino acids, DNA, pigments etc. This is known as nitrate assimilation.
From plants (producers) nitrogen as bio-molecules like amino acids enters food chain and moves to animals (consumers) and decomposers.

4. Ammonification
It is the conversion of organic nitrogen (amino acids, DNA etc) in plant and animal tissues to ammonia (NH3). After the death of plants and animals, various fungi, actinomycetes and some bacteria (ammonifying bacteria) then decompose the tissue and convert organic nitrogen (e.g. amino acids, DNA) back into the ecosystem as ammonia. This ammonia is available for uptake by plants and other microorganisms for growth.

5. Denitrification
It is the conversion of soil nitrate (NO3-) to N2. It is the process that removes fixed nitrogen (i.e., nitrate) from the ecosystem and returns it to the atmosphere in inert form (N2).
NO3-à NO2-à NOàN2
Microbes involved: Denitrifying bacteria include species in the genera Bacillus, Paracoccus, and Pseudomonas.
Anammox (anaerobic ammonia oxidation)
It is the conversion of ammonia (NH3) to N2 using nitrite as the electron acceptor under anoxic condition.
NH4+ + NO2- àN2 + 2H2O
Microbes involved: prokaryotes belonging to the Planctomycetes phylum of Bacteria, Brocadia anammoxidans
In some areas of the ocean, the anammox process is considered to be responsible for a significant loss of nitrogen