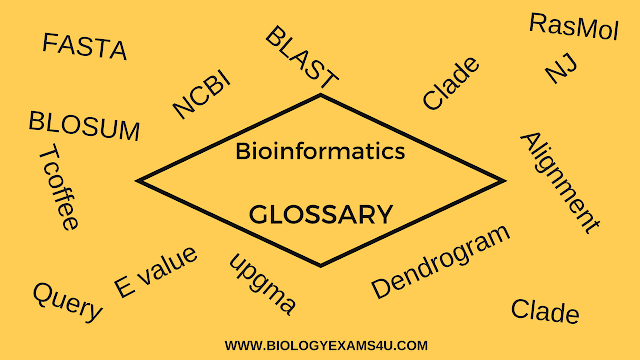 BankIt: A computer programs developed by NCBI ( national)for submitting your own sequences to GenBank.

BLAST(Basic Local Alignment Search Tool): Homology search programs. Program for comparing a sequence with all the sequences contained in the database. 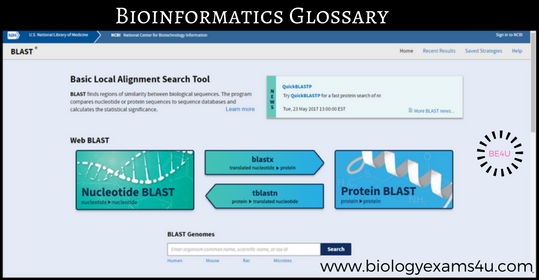 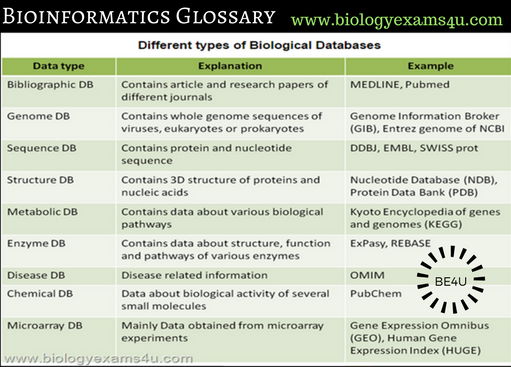 Clade: Group of related species and their common ancestors.

Cladogram: Phylogenetic tree showing the relationship between the species.

Dendrogram: Phylogenetic tree. The clustal W guide tree is often referred to as a dendrogram. It is a file with a .dnd extension.

Dot plot: Method for representing the similarity between two sequences without using an alignment.

EBI: European Bioinformatics Institute. The European homologue of NCBI in US. 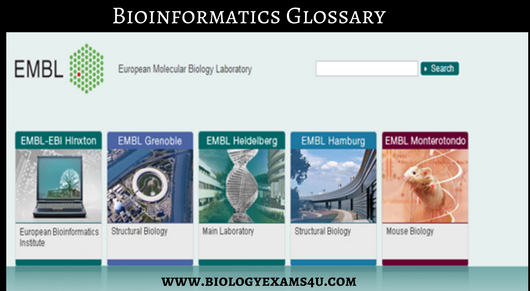 ENTREZ: The NCBI database querying system that’s similar to to SRS at the EBI. Best known in the context of the PubMed or Medline bibliographical databases.

E VALUE: Expectation value. Given a database and the score of a hit, the E value tells you how many times you could expected such a result just by chance. In sequence analysis, good E value must be very low.

ExPasy: A server maintained by the Swiss Institute of Bioinformatics. Expasy is the home of SWISS PORT, the annonated protein database.

Fasta: One of the first popular programs for searching databases. By extension, FASTA has become the name of the sequence format used by the FATA program.

GenBank: The main nucleotide database, which is co maintained by NCBI, the EMBL, and DDBJ.

Medline: a collection of bibliographic references maintained by the NCBI.

Multiple Alignment: An alignment of more than two sequences. 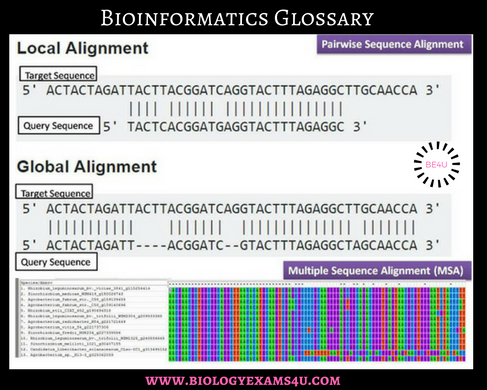 NCBI: National Center for Biotechnological Information. A component of the U S National institute of Health dedicated to bioinformatic research, software development, and the service and maintemce of leading public resources such as the GenBank (sequences) and PubMed (bibliograpgy) databases. The United states homologue of the EBI in Europe.

Nj: Neighbor Joining. It is the most popular method for reconstructing phylogenetic trees.

Pairwise alignment: Alignment of two ( a pair of )sequences.

Phylip: Everything on phylogeny. A powerful package for building phylogenetic trees.

PIR: Protein information Resources. An annotated protein database similar to SWISS PORT. It is the name of a sequences format similar to FASTA.

PROSITE: A popular collection of protein domains and patterns.

SRS: Sequence retrieval system. The system used at the EBI to search databases with keywords. It is similar to Entrez at NCBI.

SWISS PORT: One of the most extensive annotated protein databases available.

TrEMBL: Traslated EMBL, which  contains all the putative protein sequences contained in the nucleotide databases.