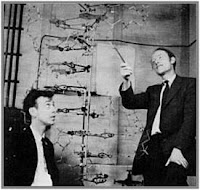 Biochemical evidences from the work of Chargaff also helped in proposing the three dimensional model of DNA. James Watson & Francis Crick shared Nobel Prize with Maurice Wilkins in 1962.
Genetic material of living organisms is either DNA or RNA


Almost all the DNA of eukaryotic cells is found in the linear chromosomes of the nucleus. Small amounts of circular DNA are found in cytoplasmic organelles such as mitochondria & chloroplast.
The bases in DNA have carbon-nitrogen ring structures (nitrogenous bases)

Bonds in DNA : Hydrogen Bonds and Phosphodiester Bonds
DNA contains many mono deoxyribo nucleotides covalently linked by 3’5’-phosphodiester bonds. The resulting long, unbranched chain has polarity, with both a 5’end and a 3’end that are not attached to other nucleotides.


The sequence of nucleotides is read as 5’-3’. DNA exists as a double stranded molecule (A few viruses ØX174 contain single stranded DNA as genetic material), in which the two strands wind around each other forming a double helix. The two chains are paired in an anti-parallel manner that is the 5’ end of one strand is paired with 3’ end of the other strand.
Most DNA molecules are right handed double helices. The stacking of the paired bases by their flat surfaces in the center of the molecules to forms a hydrophobic core. Together with the hydrogen bonds between the base pairs, these hydrophobic interactions contribute to the stability of the molecule.

DNA is negatively charged, why?
At neutral pH,there is  no charge on any of the bases, but the phosphates on the surface of the DNA molecules are ionized, giving the molecule a net negative charge.
A complete turn of DNA (pitch) has a length of about 34A0
The spacing between adjacent base pairs is 10 A0 and the helix is 20 Ao in diameter
The ds DNA has 2 different grooves: a major groove and a minor groove, where interactions between specific nucleotide sequence and specific DNA binding enzymes (like DNA polymerase) may occur inorder to activate or repress a gene action.
ii. RNA (Ribonucleic acids)
All RNA molecules are synthesised from DNA templates. Most RNA molecules that are synthesised & processed in the nucleus soon find their way into the cytoplasm, there they function in the synthesis of proteins.
RNA is a polymer chain of ribonucleotides joined by 3’5’ phosphodiester bonds.
How RNA is different from DNA?
The covalent structure is very similar to that for DNA except that uracil replaces thymine and ribose replace deoxyribose.
RNA are single stranded, though most RNA assume double stranded nature by folding back on themselves and forming hydrogen bonds (RNA secondary structure) 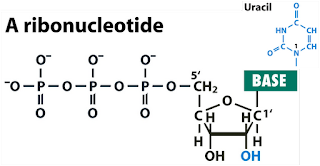 3 major classes of RNA: messenger RNA (m RNA), transfer RNA (t RNA) and ribosomal RNA
r RNA is the most abundant RNA and constituents 70-80% of the total RNA. All kinds of RNA are formed from a template strand of DNA, catalyzed by enzymes called RNA polymerases.
How to determine the concentration of nucleic acids?
Nucleic acids absorb UV light due to the conjugated aromatic nature of the bases. The absorption properties of nucleic acids can be used for  detection, quantitation and assessment of purity.
Purity of DNA
Denaturation & Renaturation of DNA
ds or ss DNA has more absorbance?
Higher the GC content higher the Tm will be. This is due to the presence of 3 H bonds between G&C compared to 2 H bonds between A&T.
Please Don't Forget to Share... Thank You... Visit Again...
Labels: Chargaff’s rule, Denaturation, DNA, DNA molecules are much more stable, Forms of DNA, hyperchromic effect, Purity of DNA, Renaturation, RNA, Stability of DNA
Newer Post Older Post Home