Agrobacterium tumefaciens is a Gram negative soil bacteria, which has natural genetic engineering capability by which it integrates its plasmid genes into plant genome. This is a natural process and we are exploiting bacteria’s ability to transfer our gene of interest into the plants.
Why bacterium enter into such association?
Agrobacterium tumefaciens will transfer genes(T-DNA region of Ti plasmid) into the plant that produces its food or nutrient called opines (opines are not needed for plants). Apart from that, it also integrates genes for cell division and proliferation leading to crown gall disease. So that more number of cells result in more production of opines. 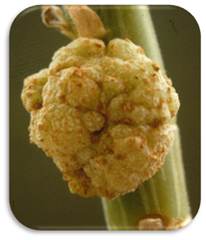