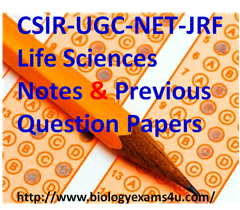 2. Among the following which is the best indicator of water pollution due to mixing of human faeces (June 2006)

3. Among the following which is not an characteristic feature of r-selected species (June 2006)

4. It has been observed the bacteria secretes toxin at high population density to check the population size. This phenomenon is termed as (June 2006)

5. The accumulation of DDT has decreased the population of pelican ducks because DDT(June 2006)

7. Phytoplankton spends very little energy on developing protective structures against predator, this suggests that why (June 2006)

8. Temporary fluctuation in population size is due to (June 2006)

10. Effective population size for completely monogamous species having 40 males and 10 females would be (Dec 2006)

12. Biodiversity hot spots are characterized on the basis of (June, 2007)

13.Which national park is not correctly matched with its organism (June, 2007)

14. Correct order for increasing order of primary productivity is (June, 2007)

3.a) Maturity at later stage (Refer: Difference between r-Selection and K-Selection)

Quorum sensing is the regulation of gene expression in response to fluctuations in cell-population density. Quorum sensing bacteria produce and release chemical signal molecules called autoinducers that increase in concentration as a function of cell density.

5.b) decreased availability of Ca for egg shells which leads into thin shelled fragile eggs
DDT and its relatives alter the bird's calcium metabolism in a way that results in thin eggshells. Instead of eggs, heavily DDT-infested Brown Pelicans and Bald Eagles tend to find omelets in their nests, since the eggshells are unable to support the weight of the incubating bird.
Reference: DDT and Birds

6. a) Endemism
Endemism are restricted in their distribution to a small region. This phenomenon of restricted distribution associated with some geographical or ecological factors is called endemism.
For example: Ficus religiosa, Ficus bengalensis, Saraca indica are endemic Indian plants.
many species of lemur are endemic to the island of Madagascar.

7.b) There is less competition

8 a) Bottle neck
If a population undergoes sudden reduction in its numbers may be due to environmental catastrophe or over exploitation, it is said to have gone through a bottle neck.

I. Humans and other large mammals; those who fit this curve produce few offspring, but provide them with good care.