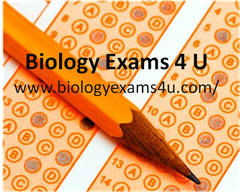 41. Archea is considered as a separate group from bacteria and eukaryotes, based on

Ans:16S rRNA gene sequence
42. Cholesterol contributes to which of the following properties of biological membranes?

Ans:The active site of the serine proteases consists of three key residues, Asp-His- Ser
44. Severe deficiency of which of the following vitamins leads to haemolytic anemia in animals ?

Ans:Vit E
45. The specific condition that occurs subsequent to the inhalation of carbon is referred to as

Ans:pneumoconiosis
46. Which of the following processes occurs in the formation of disulfide bridge between two cysteine residues?


50. When immature B cells mature in the bone marrow, they need to interact with

Ans: stromal cells and cytokines such as IL7
51.  Conversion of glucose to glucose-6- phosphate requires energy. However, critically ill patients are treated with intravenous infusion of glucose rather than glucose -6-phosphate because

Ans: A) glucose-6-phosphate is unable to enter into cells
52. Which of the following properties is common to all cytoskeletal motor proteins like kinesins, dyneins and myosins?

Ans: ATPase activity
53. The amino acid sequence of a novel membrane protein contains four immunoglobulin like domains and six fibronectin like repeats. This protein is most likely a

Ans: cell adhesion molecule
54. A set of closely related genes or genetic markers that are inherited as a single unit is

Ans: Haplotype
55. Xth nerve is an example of

Ans: mixed cranial nerve.
56. Which among the following viruses is known for its antigenic variation?

Ans: Influenza
57.  Homology modelling can be used to predict the 3D structure of only

Ans: homologs
58. Which of the following does not participate in the formation of antigen-antibody/ligand-receptor complexes?