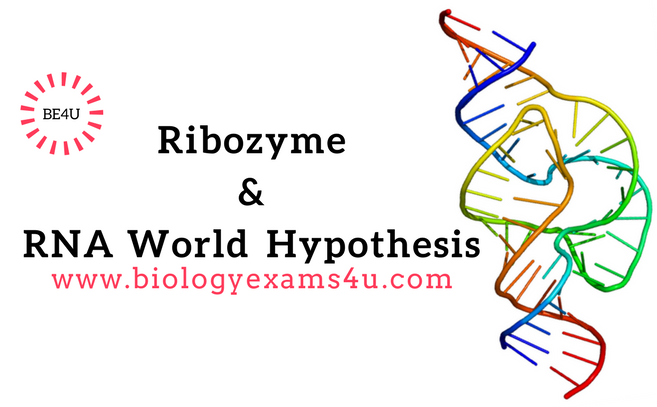 Source: Nature
Essential quality of a genetic material:
Justification: Even now, RNA is the genetic material in some viruses suggesting the capacity of RNA in storing information just like DNA

But the major question who did the function of proteins (the catalytic function)?
The discovery of ribozymes further supports ‘RNA world’ that is RNA can do the function of protein or catalysis. The catalytic ability of RNA may be later passed on to the proteins. The reason for catalytic activity in RNA may be due to the presence of 2’ OH group where in DNA it is 2’H.
Now moving into the details of ribozymes

Discoverer: Thomas Cech et al in 1983.
The first ribozyme to be discovered was spliceosomes or self splicing intron in the ribosomal rRNA genes of the ciliated protozoan Tetrahymena thermophila

Later Sidney Altman discovered ribozymes in in bacteria, Ribonuclease P an enzyme of bacteria consists of RNA and protein where RNA is found to have catalytic activity. Ribonuclease P is involved in sizing of large RNA precursors into smaller RNAs (RNA processing)
Ribozymes can form three dimensional structures just like proteins and can bind specifically to substrates and cofactors
Based on function there are two types of ribozymes
Cellular reactions catalysed by ribozymes
Applications:
Disadvantage: Ribozymes are easily degraded inside the body by various enzymes. So ribozymes are encapsulated in liposomes and is introduced into the body.
Please Don't Forget to Share... Thank You... Visit Again...
Labels: application of ribozyme, Ribozymes, RNA world hypothesis
Newer Post Older Post Home