The genetic makeup of all cells in an adult body is the same. But nerve cell is different from muscle cell or cells of the eyes morphologically and functionally. How this happens?

How specialization is achieved?
Let us make this concept clear by this figure given below.

All these cells have ~ 20000 genes distributed in 46 chromosomes.

Let us take the example of RBC. All these cells have haemoglobin gene in the nucleus.

This gene is not expressed in all cells… It is expressed or turned on only in RBCs where it has a role.. 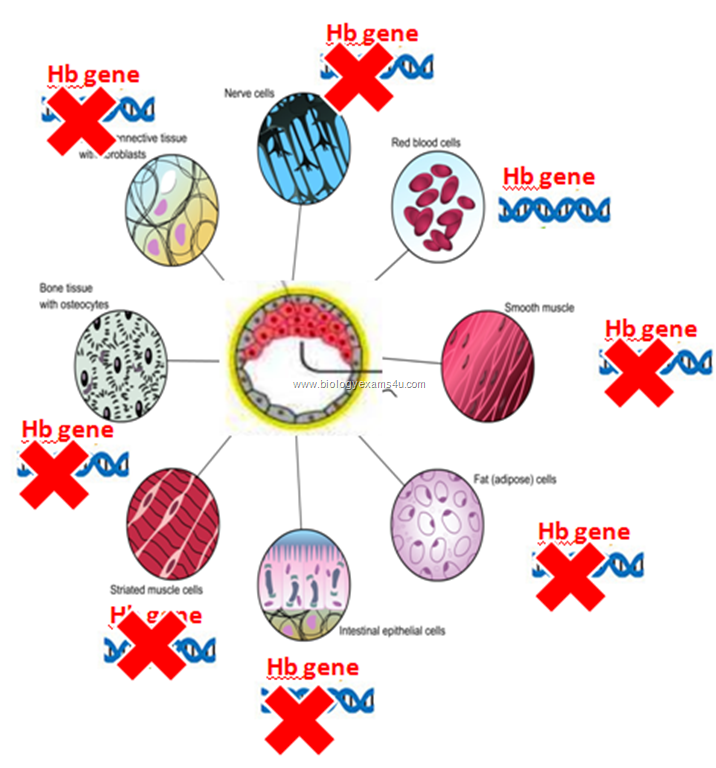 During the process of cell specialization, in each cell only specific genes are “turned on” and transcribed to RNA and translated to proteins. Rest of the genes remain inactive. That is, genes active in the neurons may not be active in muscle cells. For instance, genes for actin and myosin filaments are present in all animal cells, but these genes are active only in muscle cells. Cell specialization involves the preferential synthesis of some specific proteins like antibodies in plasma cells or Hb in erythrocytes.

Smart genes and ‘House Keeping’ Genes
Remember, there are some genes that are expressed in all types of cells or genes essential for cell survival like genes making membranes. These genes are called ‘house keeping’ genes. But genes that are expressed in only certain types of cells or expressed differentially are called ‘luxury genes’ or smart genes’. Eg: IgG genes. This differential expression leads to cell specialization.

After fertilization, the first cell the zygote has nucleus of both the gametes where the cytoplasm is entirely provided by egg. Thus the zygote has only maternal effect genes contributed by egg cytoplasm only. This is conducive for the zygote development. On first division, zygotic gene are expressed that will trigger further development and differentiation.