Proteins are the most abundant biological macromolecules occurring in all cells and all parts of cells. These are the molecular instruments through which genetic information is expressed. All proteins are constructed from the same ubiquitous set of 20 amino acids, covalently linked by peptide bonds in characteristics linear sequences. Amino acids condense to produce peptides. the bond formed is called peptide bond.

1. Peptide bond: It is formed when a water  molecule is eliminated during a reaction between –NH2 of one amino acid and –COOH of another. 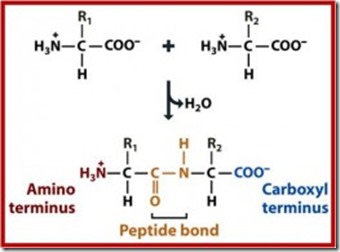 4. Hydrogen bond develops due to sharing of H+ by two eletronegative atoms. It is a weak bond.