What are Place cells and Grid Cells in Brain? Nobel Prize in Physiology and Medicine 2014 explained 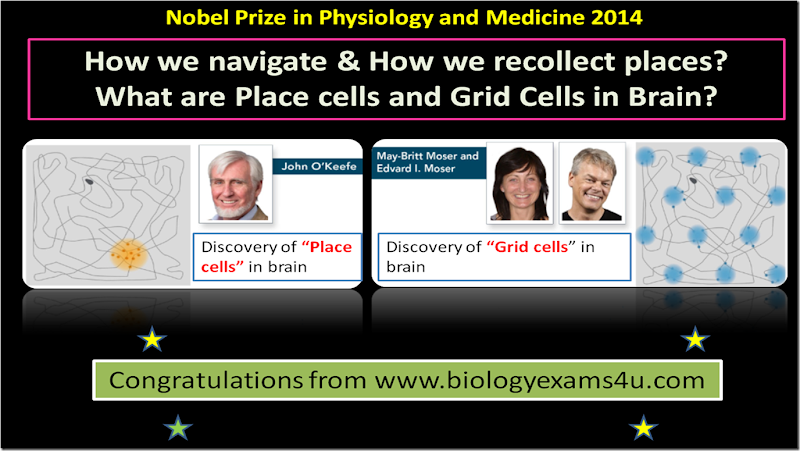 Discovery: How nerve cells in the rat brain works in finding out and recollecting a place (sense of place) or How it works in navigation ability?
What is the ‘sense of place’?

It gives a perception of the position of the body in the environment and in relation to surrounding objects. It is how we find places?
Let me explain with an example, in day to day life, we used to move around to find places that we need to go. Suppose I want to go to a nearby Zoo and this is my first time visit. Once I reached there, my brain relates the place with some surrounding objects. Within 2 to 3 visits to the same Zoo, I could locate it without any further help. Now I have the “sense of that place”. Now my brain has perception of position of that Zoo actually in relation to some surrounding objects. Suppose that entire area has been reconstructed. Now I may not be able to locate the Zoo all on a sudden as the surrounding objects that my brain used for positioning or relocating has changed.
How do we navigate to a place?

It is linked with a sense of distance and direction that is based on the integration of motion and knowledge of previous positions. Our brain creates a mental map in connection with an environment or place.
This sense of place and ability to navigate are one of the most complex processes in brain.
Dr John O’Keefe Experiment (Finding the Place cells) 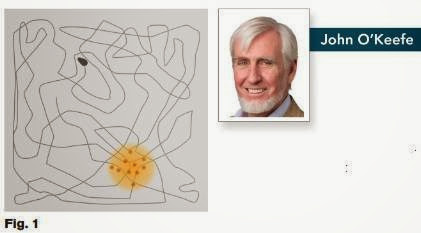 When the rat passed certain locations, certain nerve cells in the entorhinal cortex were activated. They called these cells as grid cells because of its unusual firing pattern. A single grid cell fires or gets activated when the rat reaches particular locations in an environment. These locations are arranged in a hexagonal pattern (Fig 2). They concluded that grid cells are involved in measuring movement distances and thus provided a metric to the spatial maps in hippocampus.
Brains navigational system involves other type of nerve cells like head direction cells and border cells. Head direction cells act like a compass and are active when the head of an animal points in a certain direction. Border cells are active in reference to walls that the animal encounters when moving in a closed environment.

Grid cells, head direction cells, border cells together with place cells form a complex network within the hippocampus. This network constitutes a comprehensive positioning system, an inner GPS in the brain (Fig. 3). Similar grid and place cell systems are found in many mammalian species including humans.
Applications: A better understanding of neural mechanisms underlying spatial memory is important in understanding and treating memory disorders including dementia and Alzheimer’s. O’ Keefe and co-workers showed in mouse model of Alzheimer’s disease that the degradation of place fields correlated with the deterioration of the animal’s spatial memory. The discovery of place cells and grid cells is undoubtedly a major leap in our understanding of how specialized nerve cells work together to execute higher cognitive function like ‘sense of place’ and navigational ability. Hopefully this understanding may help us to treat brain disorders in a better manner in near future.
Reference: http://www.nobelprize.org/nobel_prizes/medicine/laureates/2014/advanced.html
Image credit: http://www.nobelprize.org/ Original Paper- Download (PDF)
Please Don't Forget to Share... Thank You... Visit Again...
Labels: Grid Cells in Brain, Nobel Prize in Physiology and Medicine, Nobel Prize in Physiology and Medicine 2014, Place cells