Joint Graduate Entrance Examination for Biology and Interdisciplinary Life Sciences (JGEEBILS)
Graduate School Admissions - GS Biology Question and Answers
1. Fruitflies have a red eye colour that is determined by the gene RED. Allele R gives a red eye and allele r gives a white eye. R is dominant over r. A single red eye parent and a single white eye parent were mated. Only 50% of the resulting progeny had red eyes. With respect to the RED gene, which of the following best describes the genotype of the red eyed parent?
a. rr
b. Rr
c. RR
d. Any of the above

4. A significant proportion of students at TIFR seem to have descended from Chengis Khan. This information was inferred from:
a. Mitochondrial DNA
b. Single Nucleotide Polymorphisms
c. Y chromosome analysis
d. Ancient DNA

5. The recognition sequence for the restriction endonuclease AstWI is GRCGYC where R is any Purine and Y is any Pyrimidine base. In a truly random DNA sequence what will be the average distance (measured in base pairs) between successive AstWI cut sites?
a. 1024
b. 512
c. 4096
d. 24
6. Jitesh carried out a steady-state kinetics experiment for an enzyme degradase with and without molecule X as part of the reaction mixture. The reactions were carried out for 5 minutes and he got the following results:

7. Irshath is recording the electrical activity of neurons in a cat when the cat is shown light bars at various angles. Two neurons respond to these light bars in the following manner: What can you infer from the above data? 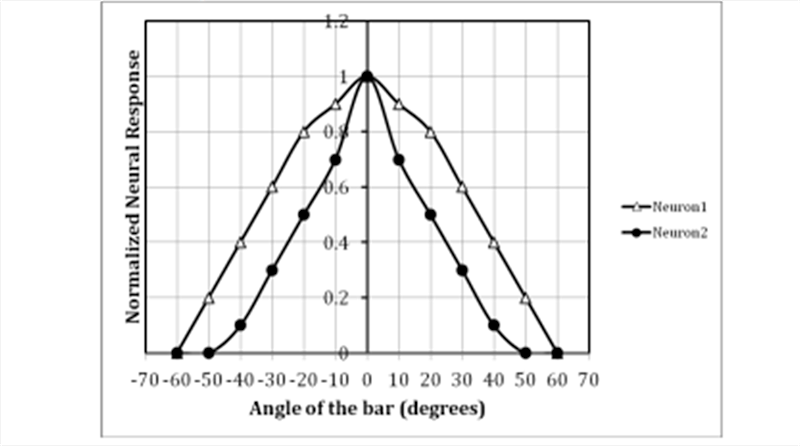 a. Bar angle does not affect neural response in Neuron1 or 2
b. A bar at 50 degrees elicits no response in either of the two neurons
c. A bar at 20 degrees elicits 50% of the maximal response in Neuron 2
d. For any given angle the difference in response levels of Neuron1 and 2 is a constant.
8. In the northeastern states of India, Yaks are a common species. Additionally, cows are also present as well as hybrids between Yaks and cows. The following figure represents genetic variation at ‘cow’ specific and ‘Yak’ specific genetic loci.Which one of the following statements is true? 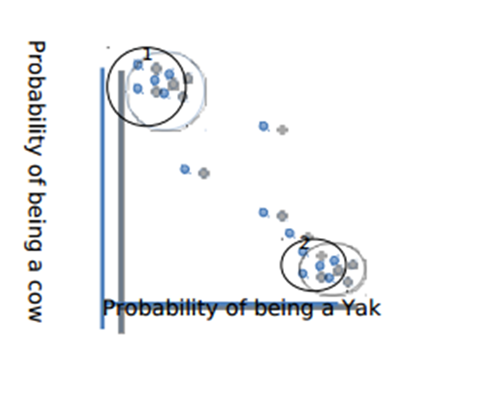 a. Most animals are hybrids
b. Most animals either Yaks or cows
c. There are more cows than Yaks
d. All hybrids have the same proportion of Yak versus cow genes in their genome

9. A student conducted an experiment where CO2 and N2 were bubbled through water in beakers A and B respectively. He recorded the pH in each of the solutions every 5 min. What is the most valid conclusion the student could draw from these results:

10. Experiments were carried out on plants living in different environments to measure the size of leaf stomata. Previous investigations have shown that plants transpire more water when the size of stomata is larger. Which of the graphs best represents a plant living in a dry environment? 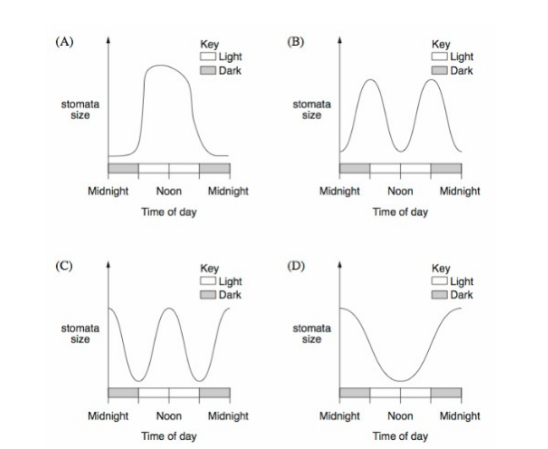 12. Alzheimers’ protein-A multimerizes at pH 2 to form aggregates which leads to Alzheimers’ disease. In the brain the pH is always neutral ~7. So what leads to aggregation of A that induces Alzheimers’ in people greater than 60 years of age?
a. Older brains are more acidic.
b. At pH 7, there will be very fast kinetic equilibrium between oligomers and monomers which can change with age to induce aggregation
c. At pH 7, the reaction does proceed to oligomerization but the rate is so low that it takes 60 years to form aggregates
d. Aggregates form during intermittent drops in pH throughout your life.

13. Mutations in two genes x and y in a diploid organism when present togather cause lethality. Which of the following may be inferred about the nature of the gene product?
a. The product of the genes function as an oligomer
b. The two genes fall in the same complementation group
c. None of above
d. The product is a homo-oligomer 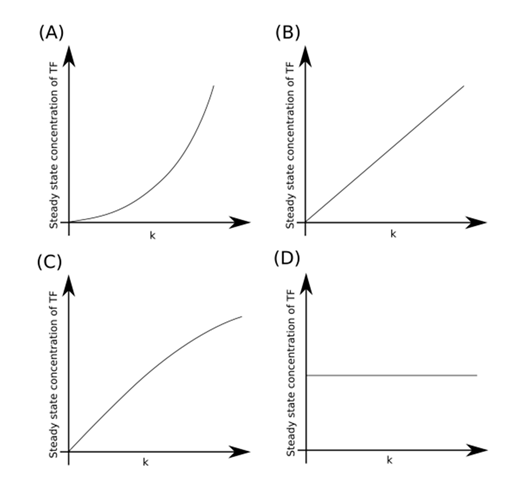 Answers
1. b. Rr
2. a. Cation exchanger resin
3. c. Humans are descended from the last common ancestor of rats and mice
4. a. Mitochondrial DNA
5. a. 1024
6. a. Molecule X is a competitive inhibitor
7. c. A bar at 20 degrees elicits 50% of the maximal response in Neuron 2
8. b. Most animals either Yaks or cows
9. b. Bubbling CO2 through water makes it more acidic
10. D
11. a. s4 is a critical gene for early development and is maternally required*
12. c. At pH 7, the reaction does proceed to oligomerization but the rate is so low that it takes 60 years to form aggregates
13. a. The product of the genes function as an oligomer
14. b. C
15.b. Z-Y-X
Please Don't Forget to Share... Thank You... Visit Again...
Labels: JGEEBILS, JGEEBILS Biology, JGEEBILS Biology previous questions, JGEEBILS test 2016