The Agricultural Scientists Recruitment Board (ASRB) shall hold a combined ARS- 2015 (Preliminary) and NET-2015 Examination in Online mode at 23 Centres across India in a staggered slot-wise examination. 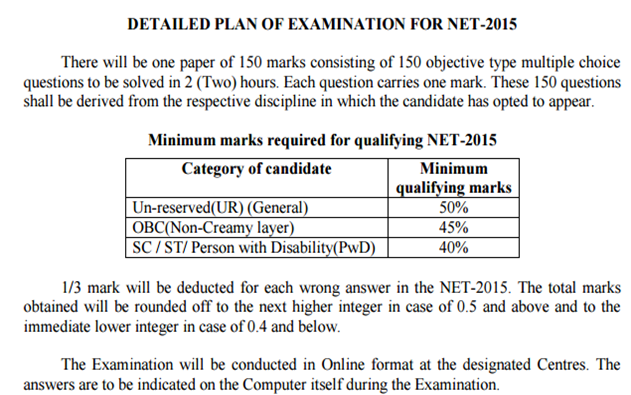 (b) ARS-2015 (Main) Examination Paper:-
ARS-2015 (Main) Examination Paper will have only one paper of 240 marks to be completed in 3 hours duration. The paper shall be divided in three parts A, B and C.
Part ‘A’ will consists of 40 (forty) questions of 2 (two) marks each. In this part, answers required will be of very short, not exceeding 10 (Ten) words at the most.
Part ‘B’ will have 20 (twenty) questions of 5 (five) marks each requiring one or two paragraphs and/or graphic explanation.
Part ‘C’ will have 6 (six) essay type or descriptive type questions. Each question will carry 10 (ten) marks and may have two or more parts. Answers are required to be written in the space provided below the question.
In no case extra sheets will be provided. All questions in parts ‘A’ ‘B’ and ‘C’ will be compulsory.
The candidates who obtain such minimum qualifying marks in the Main Examination as may be fixed by the Board in its discretion, shall be called for viva-voce in the ratio of 1:5 (category-wise) for each post.

(c) ARS-2015 - Viva-voce :- The candidates will be interviewed by a Board of competent and unbiased experts in the respective disciplines, who will have before them a record of his/her career. The object of the viva-voce is to assess his/her suitability for the Service for which he/she has competed. The viva-voce is intended to supplement the written examination for testing the general and specialized knowledge and abilities of the candidate. The candidate will be expected to have taken an intelligent interest not only in his/her own state or country, as well as in modern current of thought and in new discoveries, which should rouse the curiosity of well-educated youth. The technique of the viva-voce is not that of strict cross-examination, but of a natural, though directed and purposive conversation intended to reveal the candidate’s mental qualities and his/her grasp of problems. The Board will pay special attention to assessing the intellectual curiosity, critical powers of assimilation, balance of judgment and alertness of mind, the ability for social cohesion, integrity of character, initiative and capacity for leadership and scientific research.