2. Which one of the following compounds is generally translocated in the phloem?
a. Sucrose
b. D-Glucose
c. D-Mannose
d. D-Fructose 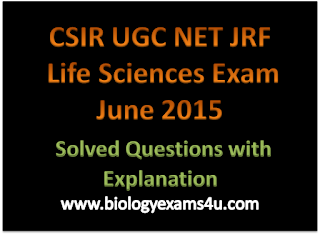 5. Nitrogen gas is reduced to ammonia by nitrogen fixation method. In order to execute the process, which one of the following compounds is usually required?
a. ATP
b. GTP
c. UDP
d. ADP


8. The S wave of normal human ECG originates due to

9. Cystic fibrosis transmembrane conductance regulator (CFTR) is known to control the transport of which ion?
a. Ca+2
b. Mg+2
c. HCO3-
d. Cl-

2. a. Sucrose
Explanation: Sucrose is translocated through phloem in plants.

3. d. B and D
Explanation: Most transposons in bacteria are DNA and eukaryotes have both DNA and RNA

5. a. ATP
Explanation: The process is coupled to the hydrolysis of 16 equivalents of ATP and is accompanied by the co-formation of one molecule of H2.

6. b. Red drop.
Explanation: The sudden fall in the photosynthetic yield in far-red region of the solar radiation spectrum is called Emerson’s “red drop”.

Explanation: The alpha helix is a common secondary structure of proteins. To fotm the helix, the bond is between C=O group of the first amino acid with NH group of the fifth amino acid ( n+4 hydrogen bonding). (Refer: Bonds in Protein structure)


8 b. Late depolarization of the ventricular walls moving back toward the AV junction.
Explanation: The S wave is the first negative deflection after the R wave. It represents the late ventricular depolarisation.