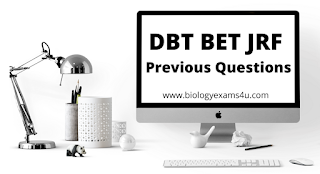 1.The major difference between hormones that have intracellular receptors and those that have cell membrane receptors is that the former is usually:
a. Charged
b. Hydrophilic
c. Glycosylated
d. Hydrophobic
Ans: d. Hydrophobic
2. A patient suffering from allergy has been advised to take anti-histamine drugs. Which one of the following biological processes is most likely to be the reason for the allergy?
a. Mast cell degranulation
b. Thymocyte maturation
c. Somatic hypermutation
d. Bystander lysis
Ans: a. Mast cell degranulation
3.  Which one of the following statements is NOT TRUE for an enhancer element?
a. it can be downstream of the gene it regulates
b. it can only regulate a nearby gene
c. it can be upstream of the gene it regulates
d. it can be within the intron of the gene
Ans: b. it can only regulate a nearby gene

4. Which one of the following statements about alleles is NOT TRUE?
a. They may occupy different loci in the same chromosome
b. There may be several at one locus
c. One may be dominant over another
d. They may show co-dominance
Ans: a. They may occupy different loci in the same chromosome
5. Allele ‘A’ is dominant over allele ‘a’ and results in dark skin pigmentation. In a mating of Aa with Aa, if 6 offspring are produced, the probability of all having dark pigment is:
a. 0.18  b. 0.75 c. 0.24  d. 0.12
Ans: a. 0.18
6. A bacterial culture grown in a medium containing radioactive sulphur would incorporate the radiolabel in the tetra-peptide:
a. serine-cysteine-tyrosine-methionine.
b. threonine-lysine-aspartic acid-glutamic acid.
c. alanine-proline-histidine-glycine.
d. tryptophan-phenylalanine-valine-isoleucine
Ans: a. serine-cysteine-tyrosine-methionine.
7. Of the dsDNA sequences given below, the sequence that is expected to have a higher melting temperature is:
a. ATGACATTATTACATTAGTG
b. GCGCGTGCATGCCCGATGCC
c. ATTATTATACGTATTTATAT
d. CGCGATCGGGGATTACGAGC
Ans: b. GCGCGTGCATGCCCGATGCC
8. A peptide of sequence -SHELR- is isolated from bacteria. Which one of the following options lists the possible phosphorylation site in this peptide?
a. H  b. L c. R d. E
Ans: a. H
9. Competitive inhibition of an enzyme can be reduced by:
a. Reducing the amount of the substrate
b. Increasing the amount of the substrate
c. Decreasing the amount of the enzyme
d. Diluting the reaction mixture
Ans: b. Increasing the amount of the substrate