1. Interpretation of behavioral data in terms of human experience is called 2. Every morning a research student turns on the light in a laboratory aquarium to feed the fish. After a couple of weeks of this routine, the student noticed that the fish come to the surface to feed as soon as the lights are turned on. The behavior of the fish is a result or
A) habituation.

3. The behavior of young ducks following their mother is known as 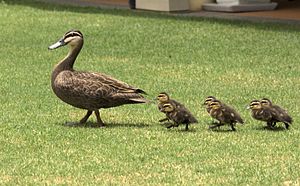 4. An animal’s ability to escape from a predator by using the explored knowledge of home are is an example of

5. A female ‘spotted sand piper’ court male repeatedly this behavior can be explained by the term

6. Community suckling of young ones is found in
A) cats

7. Marsupials are naturally found in Australia. The hallmark of the marsupials is

8. in the fish species, where internal fertilization occurs, the parental care is provided by
A) both parents

9. During hibernation in a hibernating mammal, its body temperature would be
A) lower than normal state

B) higher than normal state

10. Which combination of mechanism best explain cross continental migration of animals
A) orientation and navigation

B) orientation and piloting

9. A) lower than normal state