Synthesizing a protein using information in RNA is just like translating a language to another. During protein synthesis, a four letter language is translated to 20 letter language. There must be a specific relationship between sequences of the four bases in DNA and sequences of the 20 amino acids in the protein. Some number of nucleotides in mRNA must code for the incorporation of a single amino acid into a protein. The rules that relate the mRNA base sequence to amino acid base sequence are called genetic code.

Definition:  Genetic code is the nucleotide base sequence on DNA ( and subsequently on mRNA by transcription) which will be translated into a sequence of amino acids of the protein to be synthesized. 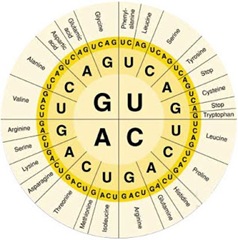 Characteristic of the Genetic code:
Triplet code: The group of bases specifying one amino acid is called a codon or code word. The codons are are formed using the for bases available in mRNA. There are strong evidences to prove that a sequence of three nucleotides code for one amino acid in protein ; that is the code is triplet.
The four nucleotide bases (A, G, C and U) in mRNA are used to produce the three base codons (43=64 three base groups) . The 64 codons include the sense codons (codons that specify amino acid) and the non  sense codons (codons that do not specify amino acid).. There are therefore, 64 codons code for the 20 amino acids, and since each codon code for only one amino acids this means that, there are more than one code for the same amino acid.

Commaless code; There is no punctuation between; that is, each codon is immediately adjacent to the next, without any spacer nucleotides in between.

Nonoverlapping code; The code is sequentially read in group of three. A nucleotide that forms part of a  triplet never forms part of the next triplet.
Each triplet is read from 5′ → 3′ direction so the first base is 5′ base, followed by the middle base then the last base which is 3′ base.

The coding Dictionary: A major problem the investigators of the genetic code faced was which code specifies which amino acid. Through the collective results of a large amount of experiments (M.W. Nirenberg and Mathaei J.H.;S. Ochoa, H.G. Khorana and Robert Holley; and a number of other researchers), a coding dictionary was prepared. 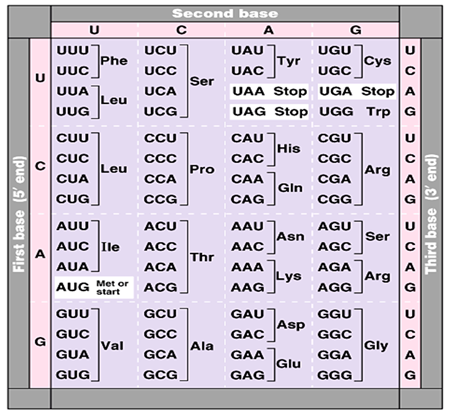 Degenerate code: All amino acids except methionine (AUG) and tryptophan(UGG) are coded by several  codons: that is, some codons are synonyms. They fact is called degeneracy of the genetic code.
For example, theonine is coded by four codons ACU, ACC, ACA and ACG.

Universality of code: The genetic code is largely universal for all living organisms and viruses. However a few exceptions are found in mitochondria. For example, UGA, one of the termination codons, code for tryptophan in yeast mitochondria.
Exceptions to universal genetic code 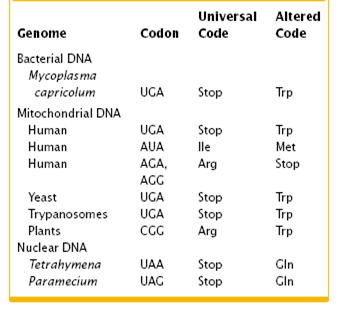 Non ambiguous code: The code is non ambiguous under normal conditions. This means that each codon specifies the same amino acid all the time.

Chain initiation codons: The initiation signal for the synthesis of polypeptide chain is AUG.