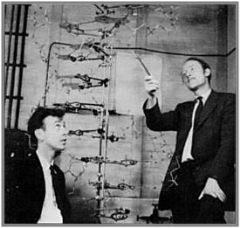 3) The sugar phosphate backbone is located on the outside of the molecule with two sets of bases projecting towards the centre. The phosphate group gives the molecule a negative charge. 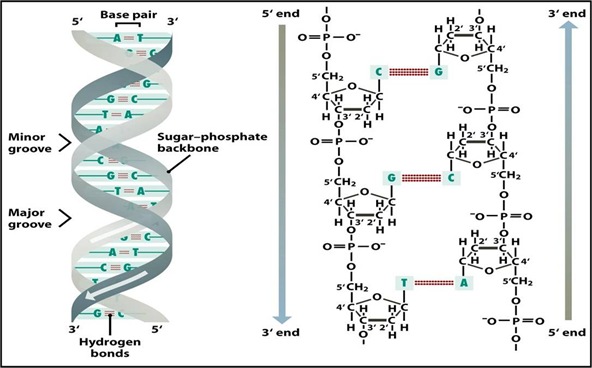 4) The 2 chains are held together by hydrogen bonds between each base of one chain and associated base of other chain.

5) The bases are stacked one on top of the other. Hydrophobic interactions and Vander walls forces between the stacked bases provide stability for the entire DNA molecule.

6) The two strands run in opposite direction or anti- parallel in nature, if one chain is aligned in the 5’-3’ direction, the other in 3’-5’ direction.

7) The helix has two external grooves, a deep wide one called a major groove and a shallow one called the minor groove. These are the regions that interact with protein molecules.

8) Base complementarity of polynucleotide chains: pairing always occurs between adenine and thymine by 2 hydrogen  bonds and between guanine and cytosine by 3 hydrogen bonds. 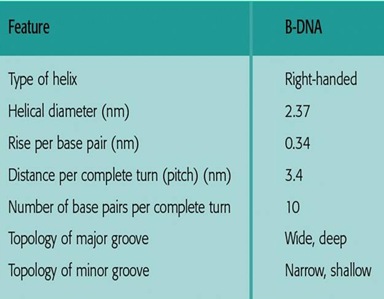 9) The distance between adjacent nucleotides or inter-nucleotide distance is 10 A0. The double helix makes a complete turn in every 10 residues. Therefore each turn is 34 Angstrom.

11) The base pairs are rotated 36o with respect to each adjacent pair.

Notes; H-bond is very weak and can be easily broken, thus allowing the DNA strands to separate during replication. The strength of H-bonds are additive.


The importance of Watson and Crick model
A genetic material should have the following functions: