1. The interactions of ligands with proteins: 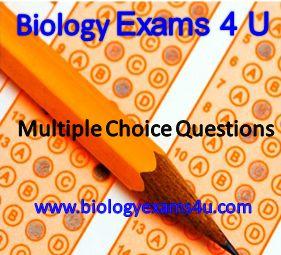 a) usually result in the inactivation of the proteins.
b) are relatively rare in biological systems.
c) are usually irreversible.
d) are usually transient.

5. Which of the following is not correct concerning 2,3-bisphosphoglycerate (BPG)?
a) It binds at a distance from the heme groups of hemoglobin.
b) It binds with lower affinity to fetal hemoglobin than to adult hemoglobin.
c) It increases the affinity of hemoglobin for oxygen.
d) It is an allosteric modulator.

6. The amino acid substitution of Val for Glu in Hemoglobin S results in aggregation of the protein because of - - - - interactions between molecules.
a) covalent
b) disulfide
c) hydrogen bonding
d) hydrophobic
7. An individual molecular structure within an antigen to which an individual antibody binds is as an:
a) antigen.
b) epitope.
c) Fab region.
d) Fc region

8. Which of the following parts of the IgG molecule are not involved in binding to an antigen?
a) Fab
b) Fc
c) Heavy chain
d) Light chain

Learn more:
Books to Refer: Lehninger Principle of Biochemistry (Chapter 5 Protein Function)
Answers:
1. d) are usually transient.
2. b) one O2 molecule and one amino acid atom.
3. d) The larger the Ka, the faster is the binding.
4. b) binding of a molecule to a binding site affects binding properties of another site on the protein.
5. c) It increases the affinity of hemoglobin for oxygen.
6. d) hydrophobic
7. b) epitope.
8. b) Fc
9. a) They convert chemical energy into kinetic energy.
10. a) actin filament assembly.
Please Don't Forget to Share... Thank You... Visit Again...
Labels: Biochemistry MCQs, Biochemistry multiple choice, Biochemistry Questions, MCQ on Protein Function, protein